The voices of silence 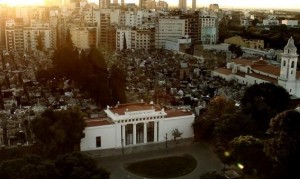 Fatherland starred this year a little scandal due to the negative from the Mar del Plata Film Festival and the BAFICI to add it to their schedule. Foremost, let´s say that the scandal exceeds the work itself, despite the fact that some elements from this movie by Nicolás Prividera show that in its construction there are some shocking elements, of questioning the viewer (the director does not like the term “provocation”), in extracting phrases of personalities like Sarmiento, Alberdi, Roca, Massera, Walsh, Eva Perón (the list goes on y is long) and recite them in front of  mausoleum of the Recoleta Cemetery, hiding some symbolism, almost always of a historical perversity. The mechanism is as follows (and I say mechanism because is precisely that mechanical staging the most difficult to endure in Fatherland): a person, book in hand, reads a text in front of a tomb, then vanishes in a spectral way, and so on, while overlap some isolated planes from the life in that emblematic cemetery from the City of Buenos Aires.

In contradiction with the schematism of the staging (something that could be glimpsed in advance: 100 minutes of recitation in front of niches, tombs and mausoleums, nothing more was promised) appear a prologue and a epilogue, where the director seeks to somehow contextualize which is almost an exercise of style. I must admit that I liked more the closing than the start, since the film starts with a series of imagery of street riots, revolutions, police repression, with the Argentine National Anthem on the background, an idea that seems to me too banal and even trite (in fact, a similar idea, but in another context, was filmed by Adrián Israel Caetano in A red bear). On the contrary, during the epilogue, the camera stars to move (let´s say that the filming in the interior of the cemetery is a succession of fixed planes) and the visual ideas are much richer: to start with, that chorus of voices which melts in a ghostly way, like a spectral noise that wants to shout, signify something from the cemetery, and then that camera which moves away and drowns in the river, like some lives that were stolen in some country´s violent past. In Fatherland -a movie that, seen carelessly, can be tedious and repetitive- is reflected, from the selection of the texts, the images captured in the cemetery, and the beginning and closing, the story of a country written in blood, a country of contrasting societies, of powers that have denied the other, where people acquire identity from their word, since the physical, the tangible, has been subtracted. Almost like a metaphor of the last dictatorship, which is undoubtedly the slice of history that allows the film to take more force and be more definite in its meanings and historicist implications (not in the traditional sense).

It´s true that the inner trajectory of the Prividera´s movie, that long sample of voices, stories and watertight images (despite how close wants the director to be to the cinema of Straub), makes it quite monotonous and a cut would not been badly. Sometimes, certain comprehensive pretension makes Fatherland lose its north, because despite Argentinean history has been marked by the virulence of power and that may lead to relate the Indian with the “gaucho” and the subversion (in the equalizing eye of the intellectuals and powerful from each time, which are cited) and give them the status of victims from their time, nonetheless it took more argumentative support that the decontextualized literary extraction. Occasionally, the movie says more about its thesis in the invisibility acquired by those cemetery workers or in that cats fighting for the body of a dove, shots filtered between the welters of voices which at moments surpass us.

Beyond this controversy, Fatherland is just a movie, and a fairly good one, I must tell. It would be nice if you come to see it.

Editor´s note: this review, with changes, was published during the MARFICI 2012.